How would you like to be an old maid at thirty two? Author Mariah Lynne’s tale of a duchess on the hunt.

If you think mid-age dating is tough today, imagine how hard it was for an 18th century independent duchess fourth in line to the British throne and considered an old maid at thirty two. No internet sites to surf, no dinner dates or movies without chaperones, and no blind dates arranged by friends. Duchess Amelia Augusta Ethrington had to meet potential suitors through prearranged introductions at royal banquets, tea dances, or other royal events.

Amelia, however, was a woman way ahead of her time. Long before the current queen changed the order of succession to allow women to take their rightful place, Amelia was second in line to rule the Duchy of Abbington behind her drunken reckless brother. Her dying father wanted his good name and duchy to remain constant and knew that Amelia becoming his successor was the only way to accomplish that. From his sickbed, he sent a message to the king asking for help and guidance. The king came to his aid giving Amelia one of his royal necklaces of diamonds and emeralds to solidify her stature with the promise that as long as she owned and wore the necklace she ruled the duchy.

At that point, the only male she wanted in her life was her King Charles spaniel aptly named Dukey. Amelia did not want to relinquish one ounce of power to a husband who by the standards of her time would want to control her. She refused to marry even though she had many royal suitors since she was beautiful and the duchy was wealthy. Instead, she opted for one night stands with errant knights, drifters, and gypsies. She always had an eye for handsome men, royal or not. 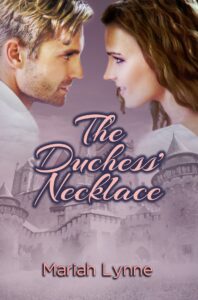 Since the duchy had many skilled tradesmen, Time Travelers would visit and ask her permission to apprentice with one of the craftsmen in the village. One very appealing but younger Time Traveler caught her eye so she invited him back to her manor for tea to discuss his proposal. She never sought romance there; it usually occurred with strangers in stables, fields, or caves but Amelia never wasted time in getting what she wanted and she desired him. They had a romantic tryst only for her to wake up groggy to the sound of pistol shots, her lover gone along with her necklace. This classic con is used to this day. An older woman, thirty two was considered old back then, romanced by a younger man only to lose money, jewelry, or wealth. Since that necklace was her title and everything she possessed, she had to find that scoundrel and get her necklace back. With the aid of a royal seer, Amelia was sent to the home of a present day seer. While there, she overheard a conversation between the seer and a very handsome man named Ryan Redstone, a jewelry appraiser hired to value the Abbington Jewels for a collector poised to purchase them from the thief. The appraiser was smart, gorgeous, and had a modern attitude about women. She knew he was the key to finding that scoundrel so Amelia romanced him thinking she could love him or leave him like any other man she had met only to find this modern guy different and wonderful. A forward thinking woman herself, she found herself faced with a most difficult decision, one that affected her life going forward and one she never thought she would have to make.

Blurb for The Duchess’ Necklace

Amelia Augusta Ethrington, eighteenth century Duchess of Abbington and fourth in line to the English throne, is considered by society an old maid at thirty-two. She refuses to marry and relinquish her authority to a husband. Instead, she finds romance in trysts with strangers. Amelia’s claim to her duchy is embodied in the form of an intricate and valuable necklace, The Abbington Jewels. But an unscrupulous Time Traveler wishing to steal the jewels and sell them at future prices seduces her, catching her off guard, and snatches the necklace.

Amelia must risk everything to Travel with the aid of a gypsy seer to find the scoundrel, and retrieve her necklace before her jealous male cousins lay claim to her duchy. Complications arise after she meets Ryan Redstone, a museum appraiser sent to acquire the jewels. Amelia must focus on her quest to regain both her necklace and title. The Duchess is faced with the most difficult decision of her life. Love in the present? Or defending her honor in the past?

Excerpt from The Duchess’ Necklace

Ryan helped me out of his carriage. We climbed the one flight of steps up to his room. Once inside, I sat down on the bed and stared out the window before giving him a serious look.

“This is not how I planned to tell you. I hoped to wait until we saw if the necklace was genuine. You must listen to me before passing judgment. I hope that you will still want to keep me in your heart afterward. ”

Ryan closed the drapes before sitting down next to me.

“Amy, how could I help but keep you in my heart no matter what your secret is?”

He squeezed my hand as I touched his lips with the gentlest kiss. Ryan filled me with a deep passion. I was ready to reveal my desire for him. I hoped he felt the same way. I knew what I wanted and decided to show him how I felt in a special manner. Standing up, I slowly removed Starr’s silk floral sash and placed it around his neck. I stepped back to dance the seductive dance of the gypsy women who camped outside my childhood manor house grounds. They had always looked graceful, bracelets jingling, ribbon colored skirts twirling as they turned and twisted by their campfire in the moonlight…

I wanted my necklace but strange as it sounds, I wanted Ryan more. I removed my blouse first, touching his face with its soft perfumed cotton. I swirled, kicking off my shoes and stepping out of my skirt. I seduced him, taking off each undergarment until I stripped myself bare. His face flushed with reluctance but finally gave in. He stared at my naked body, his eyes intoxicated with passion. I have been with enough men to know he liked what he saw. 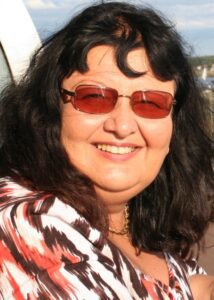 I love to take readers along with me on romantic adventures. I’m always inspired by my surroundings whether at home on a Florida Gulf Coast Island or visiting a foreign country. While staying with one of her best friends in England, she toured Chatsworth House, the magnificent home of the Duke and Duchess of Derbyshire. Walking through its massive halls and rooms filled with art and antics, I wondered what it would have been like living there as a duchess in the 18thcentury. Thus Amelia was “born.” 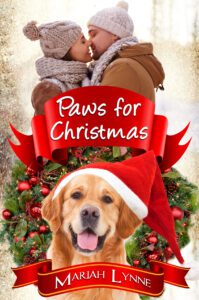 My latest release, Paws for Christmas is a second chance romance that’s fun to read anytime because love has no season.

Side effects of reading Paws for Christmas are a happy heart, an uplifted spirit, new confidence in the future, and a smile on your face! The dog in “Paws” is based on my late dog Sam.

Buy links for The Duchess’ Necklace

Available online and in print through all major booksellers