Stories From a Small Town, To Heal a Heart, The Masonville Series

Meet Jana and feel her pain. Well, it’s not exactly pain, but we’ve all been there.

My Masonville series is set in a small town in North Dakota. I gave Masonville a population of about five thousand because that was the size of the town my family and I lived in before we moved to the big city. It was big enough to have services like a veterinary clinic, restaurants and an assortment of shops, but small enough that you knew almost everyone. Sometimes that was a good thing, but not always. 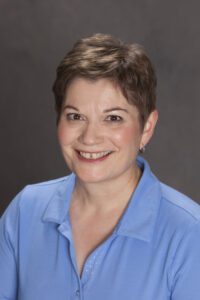 You can’t have an embarrassing moment in a small town without someone knowing about it. I can vividly remember a couple of times when I longed for the anonymity of the city. Like the time, my then four-year-old daughter threw a def-con 4 temper tantrum when we were downtown at the post office picking up the mail. I didn’t think anyone we knew had seen her meltdown, but I was wrong. My husband’s colleague told me her husband had witnessed the whole thing. Wonderful.

Then there was the time my husband was away on business and I forgot to set my alarm. I woke up in a panic, convinced I had slept in and we were late for school. I hurried my girls out of bed, got them dressed and fed and rushed them to school. When we got to the school, everything was quiet and no one was there. And that’s when I realized we were an hour too early. It was only 8am instead of 9. So, I slinked home in my car, and we watched cartoons until it was really time to go. Later that morning I got a call from my daughter’s kindergarten teacher. Apparently, someone had seen us arrive at the school that first time and she wanted to know if everything was all right. It was so embarrassing! I had to tell her everything was fine and that I was an idiot who couldn’t tell time. I still don’t know who ratted me out. We hadn’t even gotten out the car. Even your car isn’t anonymous in a small town!

But small towns aren’t all bad. Not by a long shot. In times of trouble they can provide a cocoon of comfort. When my nephew’s daughter was diagnosed with cancer, the small town where I grew up and where he and his family still live, rallied around to support them. People raised money and were just there for them. My great-niece is doing fine now. And she still has a whole town looking out for her.

Small towns are unique. In some ways they’re like living in a fishbowl; there’s not much you can do without someone seeing it. But they provide a community and friends, especially when you need them most. And that’s why I like to write about them!

What’s the novel about?

Garrett Saunders’ world changed two years ago on a road in Afghanistan. Back home, he feels like a stranger. As he struggles to find his place in the world, he meets a horse destined for the slaughterhouse and a woman bent on rescuing the strays of the world, including him.

Blair Greyson moves to Masonville to look after her ailing grandfather and give her rescue horses a home. Right away she butts heads with a surly former Marine. Despite a rocky start, they come to an agreement: Blair will board Garrett’s rescue horse and he’ll help with repairs around her farm.

Garrett finds purpose working with Blair—and falls in love with her. But she’s hiding a secret. Can she forgive herself and accept Garrett’s love, or will she let guilt and regret continue to rule her life?

He pushed himself to his feet, disconcerted by his unsteadiness. He made a few halting steps toward the gate as Blair ran into the yard.

“I forgot my sweater,” she said, grabbing the garment from the back of a chair and slipping it on. “It’s cooler than I thought. Are you sure you don’t want to watch the fireworks with us?”

His words were cut off by a loud explosion, and his only thought was that he had to protect Blair. He grabbed her and threw her to the ground, covering her body with his. He was under attack. Why was Blair in Afghanistan? How could he keep her safe?

Through the chaos and noise he heard her muffled voice beneath him. “Garrett, you’re crushing me.”

He shifted his weight slightly. “Shh. I’m sorry. You have to stay down and quiet. I can’t let them hurt you.”

She stopped struggling. “Who’s going to hurt me?”

“Can’t you hear the mortar fire? I have to protect you.”

Her hand rubbed his back in gentle circles. “It’s all right, Garrett. It’s only fireworks. It can’t hurt us. We’re safe here.”

He lifted his head and looked around. He was in Cole and Lauren’s back yard in Masonville. There were no bombs, no shelling, no Taliban. He looked down into Blair’s face, into the pity in her eyes. He rolled off her, disgusted with himself.

Disgusted and scared. He was losing his mind.

When Jana Richards read her first romance novel, she immediately knew two things: she had to commit the stories running through her head to paper, and they had to end with a happily ever after. She also knew she’d found what she was meant to do. Since then she’s never met a romance genre she didn’t like. She writes contemporary romance, romantic suspense, and historical romance set in World War Two, in lengths ranging from short story to full length novel. Just for fun, she throws in generous helpings of humor, and the occasional dash of the paranormal. Her paranormal romantic suspense “Seeing Things” was a 2008 EPPIE finalist.

In her life away from writing, Jana is an accountant/admin assistant, a mother to two grown daughters, and a wife to her husband Warren. She enjoys golf, yoga, movies, concerts, travel and reading, not necessarily in that order. She and her husband live in Winnipeg, Canada. She loves to hear from readers and can be reached through her website at www.janarichards.com 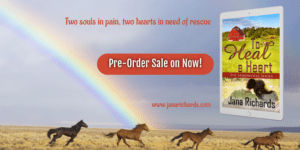 Read another excerpt from To Heal a Heart

He was slow in responding. For a long time, he pushed gravel around with his rake, until Blair thought he wasn’t going to answer her question. With a sigh, she started working again, almost missing his soft-spoken words.

“I always thought after my military career was over, I’d come back to civilian life and begin a career in policing or firefighting.”

“Those both sound like good options. So why haven’t you applied to some police forces or fire departments?”

The anger in his eyes took her breath away. “Are you deliberately trying to be cruel?”

Blair stepped back, shocked by his words. “No, of course not! What are you talking about?”

“I’m not exactly a prime candidate for either the police force or the fire department.”

“Why would you say that?” Was he worried about his drinking as well? Did he think he’d be unable to handle the rigors of policing or firefighting because of it?

He bent at the waist and rolled up his right pant leg till it was above his knee, revealing a device made of metal and plastic where flesh and bone should have been. He rose to his full height and looked her straight in the eye, as if daring her to pity him.

“As you can see, I’d have a tough time acing the physical.”

Blair wanted to cry. She wanted to run into Garrett’s arms and hold him forever, to make all the hurt go away. She wanted to scream and yell and rail against war and all the stupidity and intolerance in the world.

But Garrett wouldn’t appreciate her tears, and crying wouldn’t solve anything.

So, she sucked them back and raised her gaze to his, willing her chin not to tremble.

“I hope you’re not going to use your leg, or lack thereof, as an excuse to get out of work. There’s still plenty to be done here.”

He rolled his pant leg over his prosthesis once more, straightened and grinned at her.

Somehow Blair managed to smile back at him. “Good answer.”

Pre-order To Heal a Heart at your favorite book vendor here: