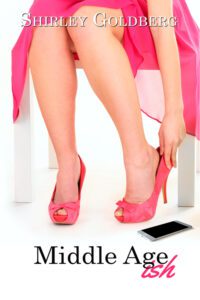 It was after six, and in the last fifteen minutes, I’d checked my watch three times, holding my wrist at lap level so Donald, my latest meet, wouldn’t notice. Nope, too busy texting.

On my second glass of wine––we’d hit the early bird special, Donald’s suggestion––at a new fish place on the water, The Fin and Tater. The air surrounding us held the briny scent of fresh tuna and their specialty, fifteen potato dishes, from sweet mashed to curly and deep-fried in olive oil.

“One minute, almost done here,” his thumbs operating at warp speed on his phone, an oversize smartphone.

Would Donald ever get off his phone? I salivated. An appetizer, however small, would do the trick.

“Sorry about that,” he said. “Don’t like to be unavailable to Johnny. So. Where was I? Oh, did I tell you he just turned twelve?”

“Well, we’re going on a father-son trip,” he explained. “I may be an older father, but I’ve got enthusiasm.”

Enthusiasm for your screen, an irritating voice in my head piped up.

Donald shook his head in amazement. “I always take two weeks to be with Johnny. I may be an older father, but I’ve got enthusiasm.”

His phone dinged, signaling another text. “Sorry, one second.”

The urge to gulp the wine was almost overwhelming, but I forced myself to sip slowly, realizing my whole face was clenched. No use telling Donald about my new student teaching gig. Third day and I was still observing, although I read and corrected papers and helped in small group work. Soon I’d graduate to the big leagues, do actual teaching.

And here I was in the shortish red skirt to my red suit, feeling pretty jazzed because I’d worn it with the red sleeveless sweater, showing a little arm definition and for what? So Donald could text-date his son on my time?

Plus, there was the hunger factor.

My phone pinged with a chat alert from the dating site. Since it was easier to text, and I was twiddling away here with a few popovers for company, I sent José my phone number. Twenty seconds later, I had a text.

—Hi, I’m intrigued. I am doing this and watching three news channels, so please excuse me if I am not seamless. Anyway, I work at U. of Connecticut in the psychology department. Still new to this dating and match-up stuff. I have talked to a couple women. One wanted to know if I was ready for a serious commitment. After one email. Is this normal? I am thinking you have more online match-type experience than I have but I do not want to presume.

Dinner wasn’t materializing, as our menus sat in the middle of the table where Donald had left them when he got his latest text. Yup, the other early-birders were chomping away. I breathed in the unmistakable, mouthwatering aroma of freshly-delivered garlic potatoes at the next table. If I could catch Donald between texts, I’d lobby for a potato appetizer, plenty of garlic, since there wouldn’t be any kissing.

A glance over at Donald, still texting in a corner of the lobby. At the moment, I texted José my phone number, our server appeared with a basket of rolls wrapped in cloth.

“Did you get a chance to look at the menu?” she asked. The early bird deadline was upon us.

“Not yet,” I said, afraid she’d disappear with the rolls. I peeled back the napkin, inhaled the scent, the warm goodness radiating from the basket. Before the rolls, I’d considered leaving, but I was now twenty-seven minutes into the date. Plus, the rolls weren’t crappy, white doughy rolls.

Nope. They were dark and seeded, three different kinds, scones and crisp crusts, a couple with raisins, or were those cranberries? I grabbed a seedy, raisiny one, tore it in half and smeared it with butter, top and bottom. Took a generous bite, geez. It was heaven. I took a healthy glug of wine. That second glass was going to my head in a good way.

Donald set his phone aside. “Sorry. I can’t help myself when it comes to my son. Do you have kids?”

Donald’s phone rang as I started to answer, and he excused himself, getting up and moving toward the little alcove in the lobby where he babysat his son on the phone.

This was turning out to be a great dinner. I finished my roll and grabbed a popover, tore off a piece and chewed, savoring the buttery smoothness. I pulled my phone out of my bag, figuring to get some business done while Donald was busy being rude.

I logged on to check my bank account. The balance was down to $989.56. Nothing new there. Texted Dana to snark about Donald and munched on the popover. My phone rang with a caller ID I didn’t recognize.

“Hi. Sunny? This is José. Figured talking was better than texting. You don’t fool around, do you? Fearless, I’ll call you fearless.”

“You gave me your number. Right away. That was awesome.” His voice was a purr, and my whole body reacted in a jumpy, jittery, adrenaline mini-rush. I grabbed my bag and headed for the door, waving and pointing so Donald would know I was stepping outside for my own phone call. His head bobbed, and he gave me a thumbs up. Apt.

The restaurant is known for its location at the end of a small street that dead ends at a boatyard and hosts a sailing club. Boats of all sizes and types, from Sunfish to two-motor jobs were docked along the jetty, but it was too dark to walk the wooden plank surrounding the parking lot. I stood listening to the slap of the waves as José waxed on about a meet that turned out to be a bust, and his history of short relationships.

“I yearn for normal,” he said.

“You didn’t have normal?” I was fascinated by his word choice. Normal. Normal was for the very young when you met one another in school or at a party. Normal was mostly over at our age, or was I wrong?

“Well, it depends on your definition.” He paused. “I know this sounds dumb. I feel I can talk to you.” His voice lowered. “Lots of sex early on. And then if there’s nothing else, it all fades away. You get bored. And you start the next one. And the next.”

“Well,” I hesitated, “I have this naïve idea that as we mature, we realize that sex is important, yes, but not the most important element in a relationship. Unless it’s missing.” I feel I can talk to you. José was better company than Donald, my so-called date.

José talked the talk, but it irked me that he might be feeding me a line. For that reason, I tried to truly listen to the voice, the breaks and pauses. Listen for the sincerity.

“Do you look for chemistry?” I asked, knowing the answer before he said it.

“Gotta go,” I said, turning back to the restaurant. The smell of rotting fish from somewhere on the docks overpowered me. “I’m on this lousy date,” I blurted. “A first meet. You’re better company than––”

“He doesn’t deserve you. Leave him and don’t bother with goodbyes. You’re too polite. Seriously. Don’t put up with that shit.”

“Yeah, I am a polite person.” Sweet that José had no boundaries when it came to offering advice to strangers.

“Nice talking to you. I’ll call you again.”

Inside the restaurant, Donald was bent over his phone in a classic text-neck posture. I wandered back to our table and plucked the remaining half of my popover, wrapped it in a napkin, and stuck it in my bag. I didn’t bother sitting. Our time was up, and according to Dana’s rules, I’d spent the required hour with Donald.

“Hey, I’ve got to get going.” I hitched my bag across my shoulder. For a second, I contemplated offering to pay for the wine. I’d consumed two glasses. Donald looked up as if not sure what was happening. A wave of irritation mixed with impatience washed over me, but I pushed it away. Not my place to tell Donald how to date or what women want.

“Good luck, Donald,” and I gave a little two-fingered wave, headed out.

Later that night, in my comfy pajamas and an old sweater, I went online, determined to start over, be more positive. I was no longer the neophyte, and I didn’t need to date just for the experience. Rather than writing random guys, I would scrutinize profiles and interview men on the phone before agreeing to meet.

After writing a couple of guys from my “favorites” folder––which contained a dozen guys––an email from José hit my inbox, then another and another. I skimmed the first two, and read the third email three times.

I hope my telephone persona did not come across as too serious. So what do you dream about? What do you hope for? I feel I have one life to live, and while I want great sex, it is also important to have great romance and a sense of closeness. Let’s meet soon.

I crawled into bed, smiling. Great sex, huh? Does anyone want crappy sex?