Three different, guys. Each one with different issues. You’ve had dinner with all three.

Would you go out again with any of them?

For my opinion, scroll to the bottom.

1. The Date Who Talks About Past Relationships on the First Meet

He should have been a therapist. His conversations are deep discoveries into why his last four liaisons—including two divorces—imploded. He loves being in a relationship. Ideally, the hanging out phase would begin soon with you in the starring role. Tomorrow would not be too soon. Even though he knows from experience to take everything slowly.

Pretty much every conversation revolves around what went wrong and how it went wrong. “I’m an enabler,” he’ll remark. “I choose needy women. I want to break that pattern.” He is sincere.

You try to change the subject. You tell him you stayed up late to watch No Country for Old Men.

“My last girlfriend loved that greasy Tex Mex,” he says. Mention the recent winery you visited? “Oh, my ex loved a glass or two of red wine with dinner.” It doesn’t stop there. He’s off with details, more information than even a mother would want.

Because this type of man has a pattern of jumping into relationships, he’s unpracticed in the part of dating that doesn’t involve intense discussion. Trying to get him to partake in an activity is like using a hard-boiled egg to hammer in a nail. He has excuses. It’s so hard to do things in the winter.

Beware. If it’s November, are you willing to wait until the spring thaw?

2. The Date Who Hasn’t Had a Relationship in Ten Years or More

Don’t even think lifestyle with this guy—he doesn’t have a life. Be careful. This could be a case of the guy trying to glom onto your life, especially if you’re high-energy and your passion is out there along with your zesty spirit.

These guys are expert rationalizers, often chintzy with the real information, the hard stuff that would allow you to form a true picture of the man. You’ll need to read not only between the lines, but between paragraphs as well.

A man who’s been fearful of the open market for so long surely has issues to hide. What he isn’t hiding? His adventurous spirit. It ain’t there, honey.

3. He Wears a Waist Pack, White Sneakers, or has the Comb-Over

These are good guys with little pizzazz. They fail to impress, especially on a first meet. 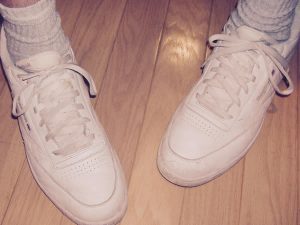 Often overlooked and ignored, they come in interesting packages of various sizes, from skinny to lumpy, balding to scruffy, short and tall.

Their degree of cluelessness is as vast as the menu choices at your local diner. The examples in the header (waist pack, etc.), are simply an idea of the silliness that leads women to cross them off The List.

Consider your imperfections alongside his.

Here’s my opinion. What would you do?