At a loss dating-wise? Distance dating during a pandemic isn’t for you? Check out author Marilyn Barr’s Aurora Turner, the heroine of Round of Applause. She’s full of suggestions for a new kind of dating.

By Aurora Turner, Heroine of Strawberry Shifters Book 2: Round of Applause

I like to say I have been picky, but in reality, I don’t make it past the first date. My dates go from “she’s pretty” to “she’s pretty boring” in ten minutes flat. I try. I really do.

I love to party, but my dream is to live surrounded by books, or better yet to find book-loving people who love to party. Any takers? I didn’t find any in my hometown as we grew up, went to college, and later graduate school. I thought soulmates found each other in school, so I stayed as long as the bank would issue student loans. While my nose was in a book, my friends paired off and married each other. I’m a professional when it comes to being a bridesmaid.

What’s a girl to do? I went nuclear. Seriously, I liquidated my assets for a longshot trip to change my life. Here’s a snippet from Round of Applause of my grand plan:

“I decided to sell my parents’ house and travel. The plan was to drive to Nashville where I booked a direct flight to London. I was going to see all the places behind the literature I love and then continue to Asia where I could teach English to their children. If I wasn’t having my own children, at least I could borrow the children of other people.”

Sounds great right? By hook or by crook I was going to find Mr. Right so we could have the type of family I remembered watching on 1990s sitcoms. The funny thing about fate is it watches for opportunities to teach you to be a better person. I was too narrow in my definition of family, marriage, and love. Destiny intervened and turned my plans on their head. Here’s another snippet from Round of Applause which shows how:

“Step one was finding the guy to be Dad so I could play Mom. I had hoped to find my perfect mix of intellectual and jokester on my travels to Europe and Asia, but I found the Sluagh instead when my car broke down in rural Kentucky.”

That’s not a typo. The soul-sucking monsters from Celtic mythology kidnapped me in the middle of nowhere. Never had a “check engine” light meant so much and been so tragically ignored. I thought I was doomed…for twenty-two days. How can I be so accurate? I lined up pebbles along the wall of my cell. I was furious when my Prince-Not-So-Charming rescuer threw them out the window. I think that was the first time I was ever angry at James. Oh, but I am certain it won’t the last. 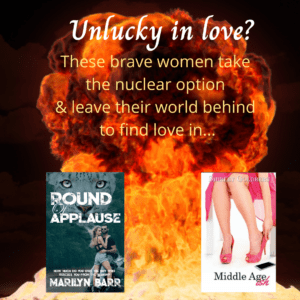 Who’s James? My paranormal Mr. Right…well one of them. The greatest thing about shifters who have the Strawberry KY parasite is they have a smell test. Potential partners who aren’t “the one” smell of garbage. Do you know how much tuition I would have saved if humans had that? Only I have the worst luck.

I wish it was as simple as failing at paranormal dating and not passing the smell test for a shifter. Oh no. Not Aurora. I passed for two shifters. I went from not enough prospects to too many prospects in a few sniffs. First Sluagh, then shifters. Who knew I would be so attractive to paranormal males? Nate told me as much in Round of Applause:

“I have never had a mate so I didn’t understand the power you can have over me, until now. When Grant and Brad described it, I guess I didn’t comprehend how I would feel…when I’m with you…how James must feel when he’s with you too.”

His last comment punches the air from my lungs. I thought I would feel happier to hear him admit I could be his mate. What have I done to these friends? I haven’t ruled out the option of leaving Strawberry but finding your true mate is part of their basic biology. I ache for the two friends torn apart. How can the shifter smell test be positive for both guys? Why would Mother Nature be so cruel?”

With shifters, the smell test never lies. I found my forever family in the middle of rural Kentucky. While it took a little time to figure out, and a lot of time to convince James to come on board, I have ended my dating career with a happily ever after…my way. Some call me Aurora the Bold, some call my shifters too old for me, but one thing is certain we were destined to be together. So, if you have struck out in the educational meat market, I highly recommend looking beyond the end of your nose. Broaden your horizons with a trip to another continent or shifter’s smell test. It worked for me, two times over. I just needed to open my heart to unconventional family structure and love as bold as me.

Round of Applause Book Blurb

How much do you owe the man who rescues you from the Sluagh?

Aurora Turner embarks on a post-graduate adventure to find her forever family only to be captured by the Sluagh, soul-sucking Fae exiles. While she is grateful to be rescued by the Strawberry shifters, her Prince Not-So-Charming is a little hasty when he starts picking out their wedding china.

Destiny gives James Martin a second chance at love. Aurora may prove to be more of a hazard to herself than the Sluagh ever were. He has the daunting task of keeping her away from sharp objects, and from ogling his best friend, Nate.

Nate Wagner is shocked when Aurora passes the prophesized shifter smell test identifying her as his mate. The beta male competes against the mature courtship skills of James with his own modern twist. However, will his devotion to James keep her out of his arms or will they create their perfect family—one they never dreamed of?

Excerpt from Round of Applause

“Thank you for the offer,” I say after taking a deep breath, “but I decided to go through with the surgery. I need to own this. I hope you both understand.”

“I have been advising everyone the surgery is what you needed. I knew what was best for you,” James says placing his hand on my shoulder. Something about the gesture makes me feel suffocated. I shrug his hand off and push Nate’s hands away.

“You don’t get to do that,” I say looking James in the eye. “This is my consequence for my actions.”

“Of course, we both will comfort you as you grieve—” Nate starts.

“You don’t get to do that either,” I say acidly. “Who said I needed to grieve? I will have to relearn a lot of tasks, but I want the challenge. I want to live. I want to live as a stronger version of myself. I want to be the girl who survived a month of torment to cut herself from the chains.”

“We are sorry it happened to you,” says Nate.

“Yes, we feel sorry on your behalf,” adds James.

“That’s the problem,” I thunder. “If you were listening, you would know I’m not sorry. You don’t have the right to be more upset, more offended, or more…more…anything, than me! You can’t take this away.” 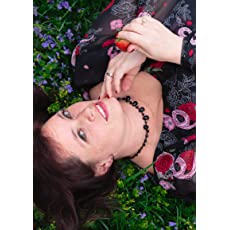 Author Bio: Marilyn Barr currently resides in the wilds of Kentucky with her husband, son, and rescue cats. She has a diverse background containing experiences as a child prodigy turned medical school reject, published microbiologist, special education/inclusion science teacher, homeschool mother of a savant, certified spiritual & energy healer, and advocate for the autistic community. This puts her in the position to bring tales containing heroes who are regular people with different ability levels and body types, in a light where they are powerful, lovable, and appreciated.

When engaging with the real world, she is collecting characters, empty coffee cups, and unused homeschool curricula. She is a sucker (haha) for cheesy horror movies, Italian food, punk music, black cats, bad puns, and all things witchy.

Buy Links for Strawberry Shifters Book 2: Round of Applause 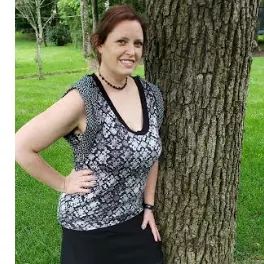