Can men and women be friends-only?

We are a group of seven women of a certain age, sitting around the dinner table (yes, there is wine), talking about relationships. Since we don’t know one another that well, there are lots of questions.

“What about men friends,” I ask. “It’s harder at our age, but do you have male pals?” Out of the seven, two have male acquaintances, but only one has a male friend. “I see him every few months. When his girlfriend is busy,” she says.

“I’ve always had men friends,” I say. “Except when I was married.”

Three of the women are surprised. One says she doesn’t think a platonic friendship between a man and a woman is possible. “Is it because one or the other of you isn’t attracted?” she asks.

“Are they ex boyfriends?” asks another.

So, I explain that not only is it possible, it’s great. “But, for a friendship between a man and woman to work,” I say, “you need chemistry. Friend chemistry.”

“What do you do with these guys?” everyone asks. “Is it like having a girlfriend?”

We all have what I call friend chemistry with those few women friends who are really close to us. The kind of friendship that if you didn’t see your friend for a year, you could still take up where you left off without any awkwardness.

“We do some girly things,” I say. “Relationship talks, dissecting dates at happy hour. Or we go to dinner. I take them shopping, sometimes against their will. Also, the man-jobs, like checking tire pressure.”

My men friends have been there for the tough times, too. There’s a still-close friend who saved my life the summer I passed out in my bathroom, my body’s reaction to sudden, intense back pain. On the way down, I banged my head on the cabinet. All that week, I slept on the floor, couldn’t bend, and couldn’t lift anything heavier than two pounds.

So he packed for me, two days before my trip to Crete, a trip I couldn’t afford to cancel. He went into my underwear drawer, the conversation going something like this:

ME: “Top drawer in the tall bureau. I need ten pairs of underwear, the ones on the left, not the right.”

The only thing that matters when your back is killing you is loose pants and soft underwear. Comfort clothes and a back brace. And he came through, pulling open the drawers, one by one, holding up shirts and pants and then moving on to the closet, asking if I wanted to take a bathing suit. 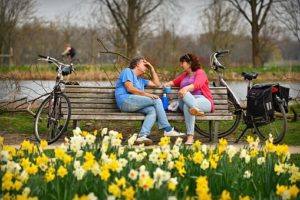 My men friends were really important because, for a time, I didn’t have many local women friends. My closest women friends lived in Greece or Florida or Canada, so I felt lucky to have a few single men in my life. It isn’t that we did anything special together, not that hanging out and talking isn’t special. Those things are basic for most women because we all need to feel supported. What we don’t realize is that men need to feel supported too. And it was useful to get the male point of view when it came to those pesky What’s going on in the relationship? talks. My men friends could spill with the real down and dirty male insights since we weren’t in a relationship together.

With two or three of my men friends, there wasn’t anything we wouldn’t talk about. I remember Hiking up Sleeping Giant, talking about Toxic Man, who called every other month (“Hi, it’s Don, a voice from the past, do you remember me?”) but never asked me out. “Hey, don’t answer the phone,” my friend advised. “He’s back-burnering you.” That was the first time I’d heard that expression.

Or I’d hear about the girlfriend my male pal was no longer attracted to; he wanted to know what he should do. (“The sooner you tell her, the better off you’ll both be.”)

Still another friend chatted up a woman in his dance class, but couldn’t get up the nerve to ask her out. “But I’m not totally sure of the vibe. How can I tell if she’s interested?”

“Meet her to go dancing,” I said. “That way you can avoid direct rejection.”

It’s not rocket science, hanging out with your testosterone buddies

The women in my dinner group all want to know what my men friends and I do together, and I have to think for a minute before answering. Is there anything we don’t do? (Other than s-e-x)

In no special order, what men have taught me

My male friends enrich my life and I like to think I do the same. We fill in the gaps, especially during the holidays or that special occasion, when no one else is available. One of my sweetest man-friend memories is of being taken out to dinner and dancing on my birthday.

There’s a hint of romance in that gesture, even if it’s platonic.

Do you have male buddies, and what do you enjoy most about them? If not, what’s keeping you from having male companions? Share this article, written with my friend Peter, about how to get more responses to online dating emails, with your male buddy. Feel free to comment.

This article first appeared in Sixty and Me as Hanging Out With Your Male Friend After 50—Are Friendships With Testosterone A Good Idea?