Don’t Get Overwhelmed by the Strangeness of it All

If you’re new to dating, you can get overwhelmed with anxiety about details, like what to wear, or fear that you won’t recognize your date in a crowded bar. “She’ll see I’m fifteen pounds overweight,” said a friend going on his first meet in two years. Other friends worry their date won’t resemble his profile photo.

“I lied about my height, but only by an inch,” said another male pal. “Will she notice?”

Instead, think of this as a fun occasion to  get to know someone new.  Everyone has something interesting to say. Get him to tell you about his trip to Alaska. Listen to her story about getting her toughest eighth grade French class on her side. If you concentrate and ask questions, you’ll forget your nervousness.

Online dating requires the hide of a hippo, and the ego of a politician.

Rejection isn’t personal. This is the first rule of dating.

I know the thought of meeting that man (or woman) for the first time in ten or twenty years can be scary. So you continue emailing or worse, texting (as if texting is more intimate than emailing), doing anything to put off The First Meet. Don’t get stuck in Email Land, that vast desert where you’re convinced you’re dating.

Emailing is not dating. There’s nothing more deflating than emailing for a month or two, finally meeting, and discovering there is no chemistry.

Nothing counts until you meet.

“I hate dating,” said Ken, on our first meet. Turned out, Ken wanted to skip the whole getting-to-know-each-other stage, and proceed directly to the relationship. New over-50 daters who try to hurry the process along will find there are no shortcuts, no alternative routes to taking the time to get to know someone.

How do you know you’re on speed? If you go out seven nights in a row, you’re not giving yourself time to think about your experience. You do have a life apart from dating, don’t you?

Do you suggest taking down your online profiles a week after meeting her? This happened to me, and my Blow Torcher, as I call him, disappeared a few weeks later, only to pop up and apologize a month later. There’s no such thing as an Insta-relationship.

You are no Picasso. Joining a dating site when you’re in your Blue Period is way too taxing for your nerves. I know I’m repeating myself, but online dating is not for the weak or the feeble of spirit. You’ll need your strength. Upbeat and positive, those are the essentials.

As my friend Claire says, “Keep the fun quotient high.” She says this is the only way to deal with rejection. “Not stressing over someone who isn’t interested is really important. Think of it as making room for the next guy, the one who’s really into you.”

“It takes as long as it takes,” says a writer friend of mine, referring to completing her novel and online dating.

1. Spend ten minutes five-six times a week emailing and returning emails. Yes, this is work, but if you chunk it into small bites, it’s doable. Aim to meet two or three new-to-you people from the dating site every month. If you truly want to connect, you must be consistent.

2. So, he’s an accountant and you were looking for a lawyer. Are you going into work with him to help prepare his briefs? Rethink what matters. Especially at this age. There, I said it, the age word. You want six feet with a full head of hair? Really? Get rid of items on your mental list unless you’re talking core values and a solid connection.

I’ll take bald with a great sense of humor (which I consider to be the ultimate in sexiness), over blue eyes and a cleft chin any day.

3. Use the profile and the profile photo as a kickoff for the meet. Instead of letting your inner critic loose like a pinball, be kind.

So, his photo is dorky; she’s a tad pudgy; he’s stocky; her profile is so long it reads like Anna Karenina; his profile is so short, it’s as if he can’t be bothered.

Sometimes being kind means not judging a person’s photo too harshly, or letting go of that typo in his profile. After all, are we really our dating profiles? How frequently will you be writing one another in real life? More likely, if things work out, you’ll be food shopping, and introducing one another to your friends.

Go ahead, take a chance. Which brings me to the next point.

4. Talk on the phone before meeting. It doesn’t guarantee anything, but it gives you a glimpse into personality and, if you’re perceptive, character. Keep it short (twenty minutes tops), and light. 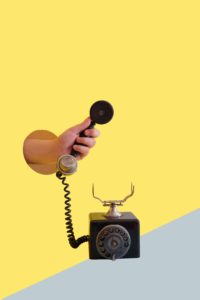 Are you having challenges in the online dating department? Questions? Check out the Advice column, where my friend Peter and I will answer your dating questions. Do you have a list of attributes you’d like in a partner? Do you disagree with my viewpoint in this article? I’d love to hear from you. Drop a comment below!