If you want a book that will have you laughing out loud and leave you giggling and smiling like a Cheshire Cat then this is the book for you. Booksprout ARC reader

The chemistry is electric and the banter is witty and flows naturally and once you add in the secondary characters you get the perfect rom com.

Fifty and dating. A lot. Did I have a choice? Shirley invented me. You know writers are infamously told to write about what they know. Shirley did exactly that. She dated. A lot. Then wrote about her dates in a little gray mini journal. Took notes in the toilet stall.

Nowadays, you can dictate straight into your phone. But this was a few years back. Or maybe  she likes journals. Anyway, she scribbled little details about her dates, like did the guy talk too much? Wear white socks or old-man pants? Talk mean about his ex?

She invented us all, from the ex-husband down to the students in her classroom.

How much of the story is autobiographical?

All I know is Shirley’s got a photo on Facebook, sort of a reenactment of her taking notes in her friend’s bathroom, like she’s on a date. I think it’s pretty funny. But who can tell true from truish? I’ve lost track myself. I’ll bet Shirley’s lost track too.

There are writers who say their characters have a mind of their own. The writer sits at the computer and the characters take over. Maybe they do.

I’m not telling you anything she wouldn’t tell you herself, by the way.

Tell us about your background

Married and living in Paris for twenty-three years, working as a French teacher. With a husband who ignored me. Your classic long term marriage. What a cliché, huh? But starting over at fifty, that’s gutsy. Going back to school, supporting myself, online dating. Great stuff. I did it all.

And then Shirley broke my heart.

Look, I’m not complaining, just telling you what happened.

Was the online dating difficult for you?

You wouldn’t believe how many guys I had to meet to keep the story moving forward. Take Bob, for instance. (I called them all Bob. So much less confusing than trying to remember names.) Nice guy, on time for our meet, chatty, but not overbearing. Until he asked me whether or not I…no, I can’t tell you. It’ll spoil the story.

What were you doing before Shirley put you in the book?

You know how people talk about their lifestyle? Their oh-so-chic lives? Well, before Shirley put me in the novel, my life was short on style with not much happening. She kick-started my mojo.

What is the quality you like most in a man?

You’re joking. No? Well, a sense of humor is a given, because I wouldn’t even go out with a guy who doesn’t get my sense of humor. If he gets my sense of humor, he gets me and I get him. Simple. Otherwise, how do you greet the world? Laughing is the best thing we’ve got as humans, separates us from animals, don’t you think?

So, kindness would be the quality I most like in a man. But who can separate  out qualities? It’s not like you’re talking about M&Ms. “I like the orange ones and he eats only the yellow and green ones.” Honesty and integrity and a moral compass all go together.

What or who is the greatest love of your life?

Hmm, that question is a problem. If I answer it, I’ll give the whole book away. Could you ask me another question, please?

Sure. What do you most value in your friends?

My friends stuck by me even at my worst, as those of you who read the book know. Great friends are the people in your life you can say anything to, behave badly with in a bad moment and nothing needs to be forgiven. It goes without saying.

Friends also tell you what you need to hear when you least want to hear it. That’s even more valuable. Everyone needs one friend who’ll slap her across the face—metaphorically, of course—and tell her to snap out of it. Reminds me of Cher in that old movie, Moonstruck.

Except Cher slaps Nicolas Cage across the face and yells, “Snap out of it!.”

What do you consider the most overrated virtue?

Probably temperance. There’s virtue in being passionate about what’s important, even if you’re over the top. Getting angry for a good cause is more important than being in control.

What is your best virtue?

I like to think it’s my sense of humor. I never leave home without it.

How important are looks in a relationship?

Good looks help, but they’re no substitute for that little thing called chemistry. The thing is you don’t earn your looks. You’re born with them or you aren’t. But the more you like someone, the better he looks.

How about a couple of speed dating questions. What’s your fave movie?

Breakfast at Tiffany’s. Um, I need more than three words, is that okay? The Apartment, you know, with Shirley MacLaine and Jack Lemmon. Moonstruck. I love new movies, too, but I’m partial to the old classics. It Happened One Night. An Affair to Remember. 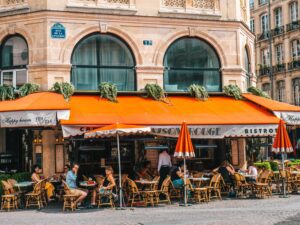 Paris. I go back every year.

If a movie was made about your life, who would play you?

Uma Thurman. I know, she doesn’t look anything like me. So, are you suggesting my life is movie material? Just because I went on a few dates? You know, when Shirley originally got the idea for the dating contest between Dana—my good friend in the book—and me, she was planning on having me meet a hundred guys. Can you believe it?

Yes, and I’m thrilled. Eat Your Heart Out is the title. Dana’s the main character. And Pluto, my dog, will be making a guest appearance.

Oops. I don’t know if Shirley even knows that yet.